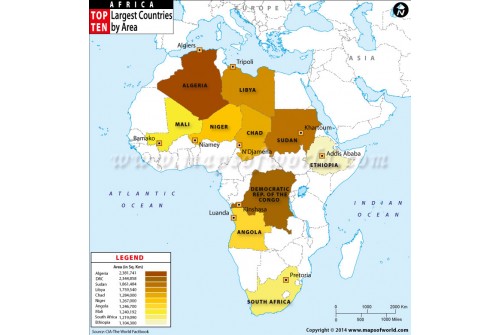 The top ten largest African countries by area map is an African continent map shows the international boundaries of African countries along with the location of its ten largest countries by area. All the 10 countries have been shaded with dark to light colors in decreasing order of their total area. Algeria, the largest country of Africa, is followed by the Democratic Republic of the Congo. They have been depicted with  darker shades of brown. Ethiopia, the tenth largest country of Africa, has been depicted in cream color to show the difference. The capital cities of all the ten largest countries have also been precisely marked on the map. The actual area of each country is mentioned in the map legend. This map is useful for educational purposes, general references, cartographic usages, etc.