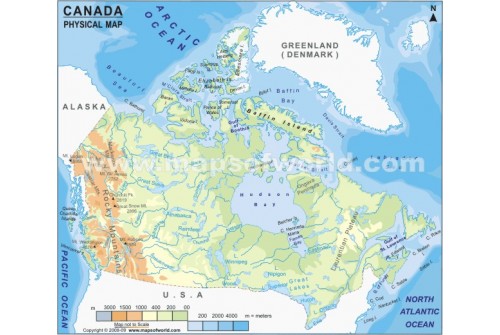 The Canada Physical Map shows the distribution of the major physical features of the country along with its relief pattern. The prominent rivers, lakes, mountain ranges and highland of Canada are also precisely marked on the map. Besides, the locations of the country’s major cities and towns are clearly shown on the map. In addition, the map provides information about the national capital city, international boundary, neighboring countries and the adjoining water bodies such as bays, gulfs, seas, straits and oceans. Further, the map shows the imaginary latitudinal and longitudinal lines at an interval of 20° each on the surface of the earth. This digital map is very useful for tourists, researchers, teachers, students, businesses etc.