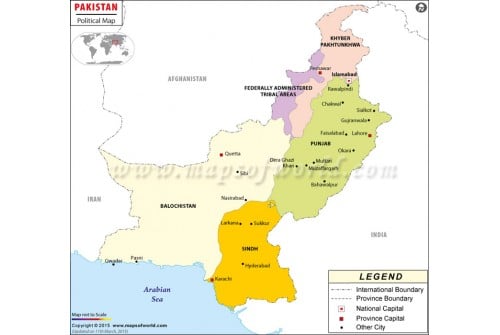 The Pakistan Political Map shows the political division of the country into four provinces, a federal capital territory and federally administered tribal areas. All the provinces and the regions are decorated by different bright colors in the map. The map also skillfully illustrates the distribution of Pakistan’s neighboring countries and water bodies, such as India in the east, Afghanistan in the North and northwest, Iran in the southwest and the Arabian Sea in the south. This drawn to scale digital map is available in diverse formats without watermarks and is useful for teacher, students, researchers, businesses, project work etc.