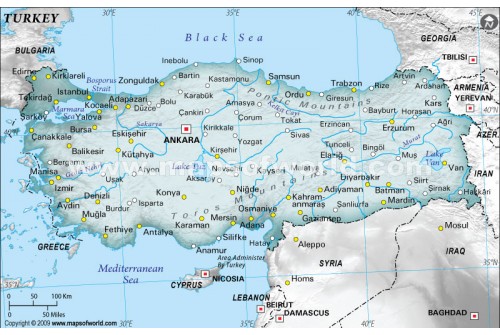 The Turkey Physical map shows the location of the mountain ranges, lakes, rivers and other geographical features of the country along with location of its major towns and cities. Besides, the location of the area administered by Turkey is depicted on the map. The surrounding water bodies including Black Sea and Mediterranean Sea are also shown on the map. The relief shading of Turkey and its neighboring nations is also given on the map. This map comes in various formats and is easily downloadable and editable. It can be used by geographers, geologists and tourists for references.