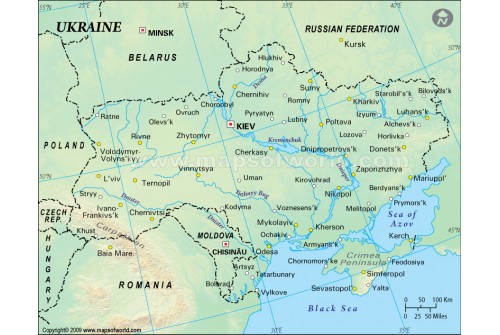 This Ukraine Physical map shows the relief of the country highlighting the locations of the major physical features such as major rivers, lakes, Carpathian Mountains etc. Ukraine’s landscape is made of plateaus and plains crossed by rivers, which has been precisely shown on the map. The only peninsula of the country Crimea Peninsula is also shown in the map. This map along with the physical features shows the location of the major cities and the capital city Kiev of the country. The neighboring nations and their capital cities are also marked on the map. The relief pattern of bordering nation of Russia, Moldova, Belarus, Poland and Romania is also shown on the map. This map is useful for analyzing the relief pattern of the eastern European nations, the map is also useful for physical geographers, geologists etc.﻿