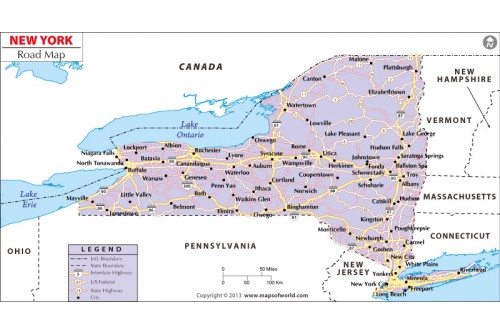 New York Road Map shows the major roads layout of this northeastern state of US. Roads are almost the lifeline of US economy and transport, the interstate highway connecting all the states, the state highway and the US federal road network of New York State have been clearly demarcated in this map. The location of the important cities across the major road junctions are also precisely demarcated. The neighboring states of New York namely New Hampshire, Vermont, Massachusetts,  Connecticut in the east, Pennsylvania, New Jersey in the south and Ohio in the south west and neighboring country Canada borders the state from the north. Lake Ontario in the north and Lake Erie in the west forms the states coastal boundary. This road map is useful for tourists and travelers as a road guide.