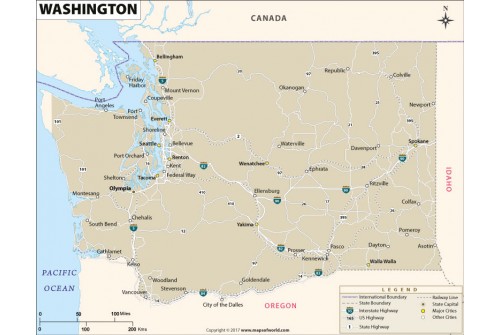 The Washington State Map is a general map of the state providing detailed information about the state roadways, railway line, international boundary and the state boundary. In the map, the interstate highways, US federals and state highways are precisely presented along with the state capital, major cities and other cities of the state. The neighboring states of Washington namely Idaho and Oregon are also marked on the map. Washington is one of the states of USA, which shares its boundary with Canada; and the same is shown on the map. A map legend is given at left corner of the map to explain the symbols used in the corresponding map. This digital map is available in four diverse formats such as AI, EPS, Layered PDF and JPEG. This map is useful for tourists, teachers, businesses, students, general public etc.