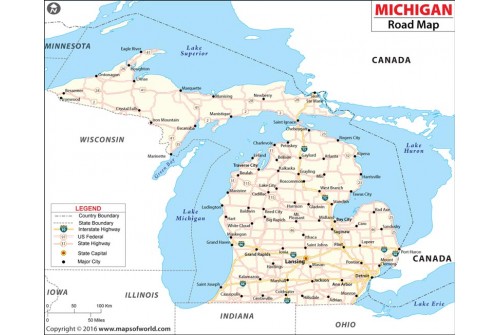 The Michigan Road Map as the name suggests shows the road network of the state including the interstate highways, state highways and US federal roadways. The map, in addition shows the locations of the major cities of the state. Further, the state boundary and the international boundary are precisely demarcated on the map. The surrounding water bodies including the Great Lakes namely Lake Erie, Lake Huron, Lake Michigan and Lake Superior are also shown on the map. The neighboring states of Wisconsin, Ohio and Indiana are clearly marked on the map. This drawn to scale map is available without watermark. The map is useful for tourists, students, teachers, researchers, businesses etc.