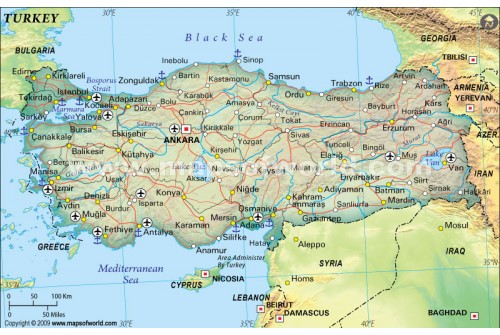 The Turkey Political Map, Dark Green is a detailed map of the country showing the major highways, railway lines, major airports and seaports of the country. In addition, the map illustrates the location of the major cities, other cities and the national capital city. Further, the neighboring countries and the adjoining water bodies including seas and strait of the country are precisely marked on the map.  The map is available in diverse colors. In this map, shades of green color have been used to present the relief pattern of the country. The map is obtainable without watermark in diverse formats, some of which are fully editable. The map can be used for tourism, references, cartographic usages, businesses, educational purposes, official usages etc.