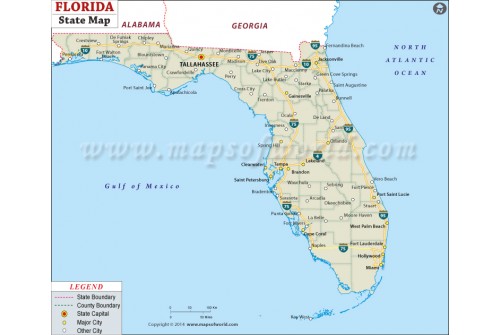 The State Map of Florida shows the distribution of major cities and towns in the sixty-seven counties of the state, with the clear demarcation of the counties boundaries and the state boundary. The capital city of the state, which is Tallahassee, is also precisely highlighted in the map. The map provides additional information about Florida’s neighboring states Georgia and Alabama and about its surrounding water bodies, which are the Gulf of Mexico and North Atlantic Ocean in the western and eastern side of the state respectively.  This drawn to scale map is available in digital and downloadable format without watermark. The map is useful for general references, for businesses, for education purposes etc.