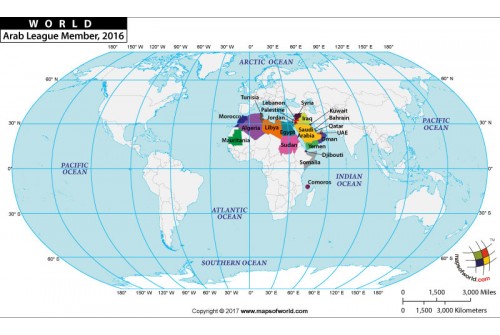 The World Map of Arab League Members shows the distribution of the Arab League Member countries in the world. The Arab League members mainly the Middle Eastern and some African countries have been highlighted by bright colors in the map. In addition, the international boundaries of all the world countries have been precisely demarcated on the map. Further, the five major latitudinal lines are shown on the surface of the earth. The distribution of the five oceans of the world namely the Pacific, Atlantic, Arctic, Indian and Southern Ocean are also illustrated on the map. This map is very useful for educational purposes, businesses, presentation, general studies etc.