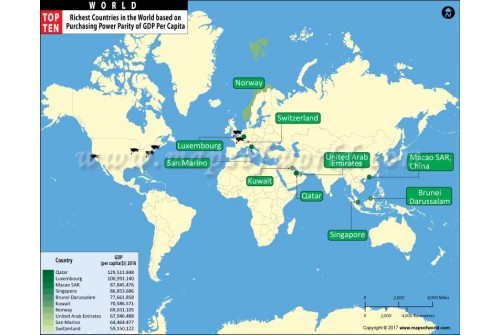 The Top Ten Richest Countries Map as the name suggests highlights the top ten richest countries of the world in 2012 based on GDP (PPP) Per capita. , , , , , , , , , and are the ten countries with very high GDP in the world; in fact, has the highest GDP. The map also provides information on the international boundaries and oceans of the world. In addition, five notable latitudinal lines are shown in the map namely Equator, Tropic of Cancer, Tropic of Capricorn, Arctic and . Equator divides the earth into northern and southern hemisphere. This digital map is drawn to scale and is useful for research work, project work, presentations and businesses.