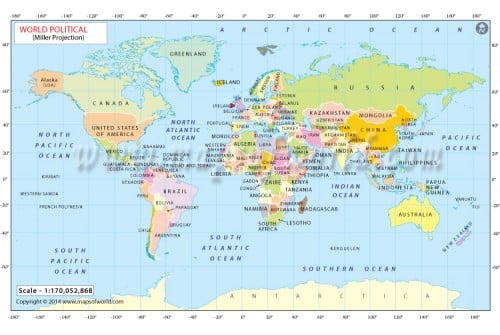 The World Political Map - Miller’s Projection is a precisely drawn map of the world using O. M. Miller’s projection technique of mapping. Miller’s projection is a modified version of Mercator’s projection of the world, without distorting the poles. This world map shows the international boundaries of the countries along with additional information on the coastal boundaries, island nations and seas and oceans of the world.  The latitudinal and longitudinal lines are also shown at equal intervals on the surface of the earth. This map is useful for cartography, teaching, references, project work and general studies.